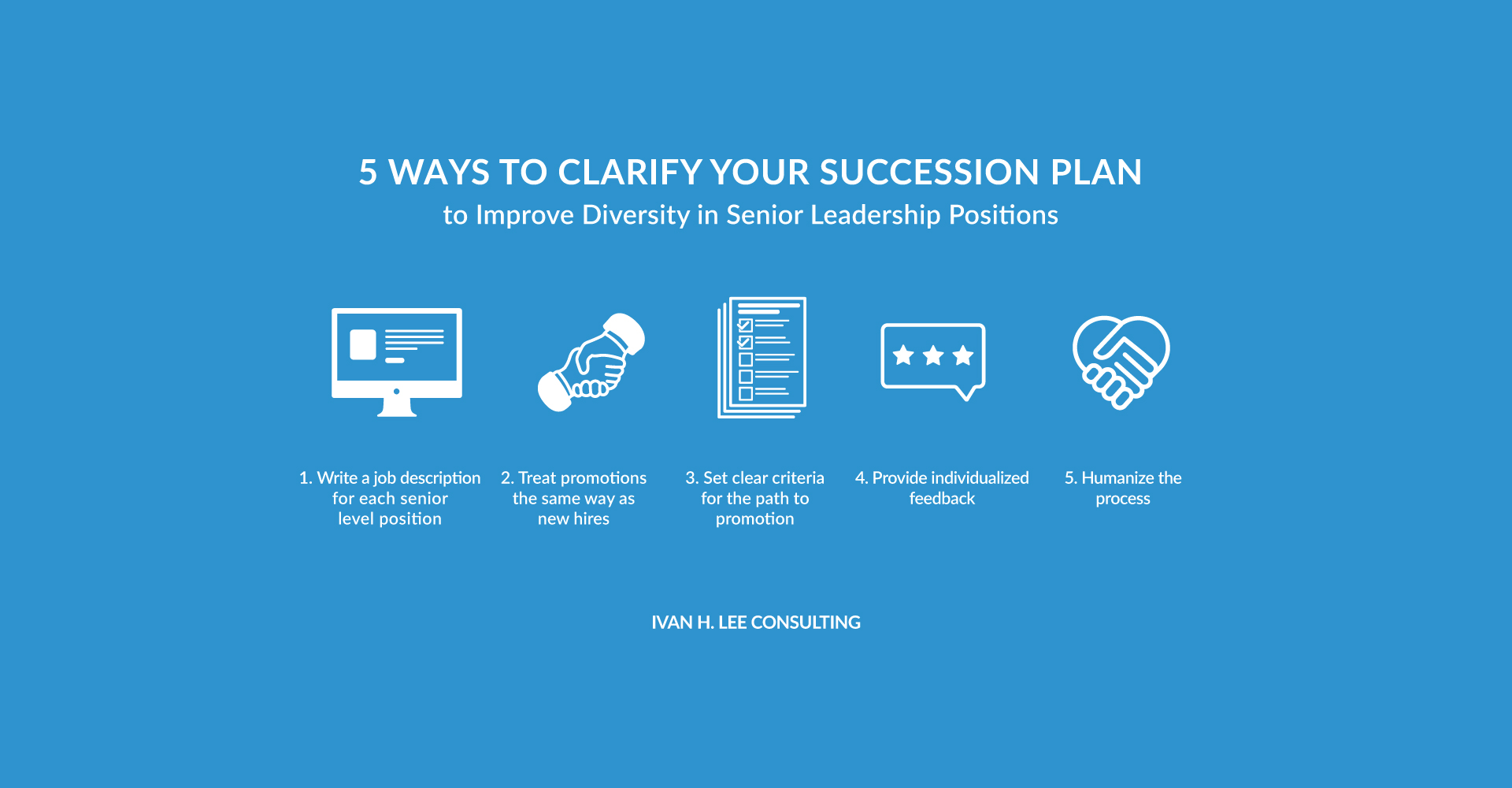 Leadership teams of major organizations haven’t historically been diverse, but there is a way to make things better. Diversity in senior leadership teams takes intention, work, and planning. In my previous articles, we examined how retaining underrepresented talent as well as identifying where minority staff aren’t given promotions in your organization are keys to fostering a diverse workplace. However, if you really want the diversity within your organization to flourish, you need to create and implement a clear succession planning strategy so that underrepresented individuals have opportunities to advance all the way through, from entry-level to VP and even extending to C-Suite positions.

According to a Deloitte Insights article entitled The holy grail of effective leadership succession planning, after surveying hundreds of executives and conducting interviews with CEOs, executives, and HR leaders, they found that “although 86% of the leaders they surveyed thought succession planning was urgent or important, only 14% felt they did it well.”[1] Many US-based companies don’t have a clear plan in place, so what happens more often than not is that hiring decisions at the VP level and above are decided by senior leadership (usually White males) getting together for a beer and informally discussing who they want to replace or join them (again, usually White males.) Rarely are promotions advertised publicly or given job descriptions.

This typical approach to succession is problematic for diversity because underrepresented talent don’t get a chance to vouch for themselves and recruiter bias goes unchecked. Upper leadership positions get filled without any clearly defined criteria and more often than not, it ends up being an “country club” that sees no incentive for changing the way things are done, leaving your organization as homogenous as before.

How to Clarify Your Succession Plan

How then does an organization go about clarifying the succession plan? In my work, I have seen several approaches that are effective:

1. Write a clear job description for each senior-level position.

Include a panel interview made up of people outside of the department and people from underrepresented backgrounds so that there are diverse voices and perspectives at the table.

3. Set clear criteria for the path to promotion.

Outline concrete objectives that must be met before being considered for the promotion. For example, to be considered for a VP position, one must have experience managing $5M in P&L, oversee 20 people in a chain of command, accomplish something significant that 5 other VPs can vouch for, and bring a background that is a specific level of diversity within one’s own team.

For individuals looking to be promoted, give open and honest feedback on career growth and concrete steps to promotion. Address roadblocks and ensure that individualized development plans are being implemented for each member of the department. For example, an individual may need to be made aware that they need to move teams in order to have expanded responsibilities before being considered for a promotion.

Many people in senior leadership positions forget how they got there in the first place. Have your current VP write the narrative of how they were promoted. Ask questions such as: Who helped you get here? Who took a chance on you? In what ways did you feel inadequate for the position at the time of promotion? How did you grow into the position? Going through exercises like these helps to bring empathy and humanize the process of considering whom they would want to take a chance on when looking at potential promotions.

Having a clear succession plan in place is vital if you want to encourage diversity at all levels of leadership. In the words of the Deloitte study, “The potential gains from doing succession planning well go far beyond the obvious result of having a steady pipeline of leaders ready to step into new roles… [the benefits include] a more-diverse portfolio of leaders as a natural outcome of an objective, unbiased identification process.”[2]

In my next article, I will explore other ways organizations can retain more of their underrepresented talent. Follow me on LinkedIn or subscribe to my email list to receive updates on my new articles.

This article is part of a series of articles on the importance of retention in DEI. Other articles in this series include: